Bible Verse:
Mark 3:13-19
13 Jesus went up on a mountainside and called to him those he wanted, and they came to him. 14 He appointed twelve that they might be with him and that he might send them out to preach 15 and to have authority to drive out demons. 16 These are the twelve he appointed: Simon (to whom he gave the name Peter), 17 James son of Zebedee and his brother John (to them he gave the name Boanerges, which means “sons of thunder”), 18 Andrew, Philip, Bartholomew, Matthew, Thomas, James son of Alphaeus, Thaddaeus, Simon the Zealot 19 and Judas Iscariot, who betrayed him.

Luke 6:12-16
12 One of those days Jesus went out to a mountainside to pray, and spent the night praying to God. 13 When morning came, he called his disciples to him and chose twelve of them, whom he also designated apostles: 14 Simon (whom he named Peter), his brother Andrew, James, John, Philip, Bartholomew, 15 Matthew, Thomas, James son of Alphaeus, Simon who was called the Zealot, 16 Judas son of James, and Judas Iscariot, who became a traitor.

Talking Points:  While Jesus was on Earth, He chose 12 friends to travel with Him and to learn from Him.  They were His students and He told them how to live their lives to honor and glorify God.  He knew that these 12 men would be His friends and would teach people all about Him after He was gone. These 12 men were called His disciples.

Questions:  What were Jesus’ friends called? What were the names of some of Jesus’ disciple that we just read about?  Do you think you’d like to be friends with Jesus? Why?

Activity:  On a piece of paper, write a large “12”.  With the construction paper, cut out the outline of 12 men.  Count them with the child and then glue them around the “12”. 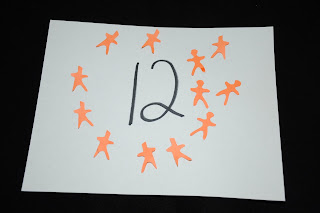 Prayer:  Heavenly Father, we want to know You and desire to be called Your friends.  Help us to know you more. Amen!