Lesson Learned:  Jesus feeds a lot of people with just 2 fish and 5 loaves of bread.

Bible Verse:
Luke 9:10-17
10 When the apostles returned, they reported to Jesus what they had done. Then he took them with him and they withdrew by themselves to a town called Bethsaida, 11 but the crowds learned about it and followed him. He welcomed them and spoke to them about the kingdom of God, and healed those who needed healing.
12 Late in the afternoon the Twelve came to him and said, “Send the crowd away so they can go to the surrounding villages and countryside and find food and lodging, because we are in a remote place here.”
13 He replied, “You give them something to eat.”
They answered, “We have only five loaves of bread and two fish—unless we go and buy food for all this crowd.” 14 (About five thousand men were there.)
But he said to his disciples, “Have them sit down in groups of about fifty each.” 15 The disciples did so, and everyone sat down. 16 Taking the five loaves and the two fish and looking up to heaven, he gave thanks and broke them. Then he gave them to the disciples to distribute to the people. 17 They all ate and were satisfied, and the disciples picked up twelve basketfuls of broken pieces that were left over. 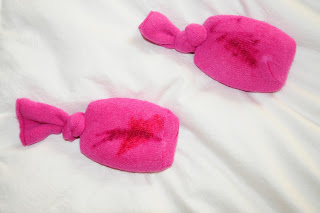 Talking Points:  Did you know that Jesus can do the impossible? One time while He was teaching, lots and lots of people were hungry but there wasn’t enough food for everyone.  Jesus told His friends, called His disciples, to take 2 fish and 5 loaves of bread and feed all these people.  And they were able to do it. And they even had leftovers!  God did the impossible by feeding all these people with just a tiny amount of food.

Questions:  How many loaves of bread did Jesus have? How many fish? Do you think that would have been enough fish to feed lots and lots of people?

Activity:
With the child’s help, put a new bar of soap inside a clean baby sock.  Tie a knot at the bottom of the sock.  Let the child decorate the fish with the markers.


Prayer:  Heavenly Father, all things are possible because of You. You fed 5,000 people with just 2 fish and 5 loaves of bread.  Thank You for all Your miracles! Amen!