What's for Dinner? | Teach for Jesus
Skip to content

Lesson Learned:  God takes care of us and provides for all our needs.

Materials Needed: pictures of food (a good place to get these is in the Sunday paper coupon section or the circulars you get in the mail for grocery stores)

Ruth 2:2-3, 14-20
2 And Ruth the Moabite said to Naomi, “Let me go to the fields and pick up the leftover grain behind anyone in whose eyes I find favor.”
Naomi said to her, “Go ahead, my daughter.” 3 So she went out, entered a field and began to glean behind the harvesters. As it turned out, she was working in a field belonging to Boaz, who was from the clan of Elimelek.
14 At mealtime Boaz said to her, “Come over here. Have some bread and dip it in the wine vinegar.”
When she sat down with the harvesters, he offered her some roasted grain. She ate all she wanted and had some left over. 15 As she got up to glean, Boaz gave orders to his men, “Let her gather among the sheaves and don’t reprimand her. 16 Even pull out some stalks for her from the bundles and leave them for her to pick up, and don’t rebuke her.”
17 So Ruth gleaned in the field until evening. Then she threshed the barley she had gathered, and it amounted to about an ephah.] 18 She carried it back to town, and her mother-in-law saw how much she had gathered. Ruth also brought out and gave her what she had left over after she had eaten enough.
19 Her mother-in-law asked her, “Where did you glean today? Where did you work? Blessed be the man who took notice of you!”
Then Ruth told her mother-in-law about the one at whose place she had been working. “The name of the man I worked with today is Boaz,” she said.
20 “The LORD bless him!” Naomi said to her daughter-in-law. “He has not stopped showing his kindness to the living and the dead.” She added, “That man is our close relative; he is one of our guardian-redeemers.”

Talking Points:  Ruth and Naomi were part of the same family, and they didn’t have anything to eat.  They believed in God, though, and they knew that He would take care of them.   They went to some fields and picked barley for the man that owned the field.  The man, named Boaz, was very nice and he let them eat as much as they wanted.  Boaz also believed in God.  God provided for the women, through Boaz, because they were faithful to Him.

Questions:  Where do you get your food from? Do you have to pick it out of the field?  Did you know that most food has to grow in a field or on a farm and then gets shipped to a grocery store where we buy it?

Activity:  Give the child the pictures of the food that you have cut out and tell them to make a face with the food that they have. 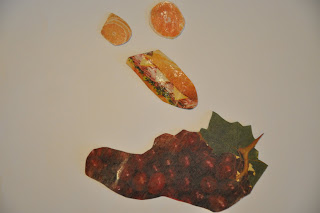 Prayer:  Heavenly Father, You provide everything we need: food, water, clothes, friends! Please help us show the same kindness Boaz showed and help us to be more like You! Amen!