The Pumpkin Parable | Teach for Jesus
Skip to content

…meant this post to be for Halloween but we carved our pumpkins a few days after Halloween…good thing dates don’t mean anything to my daughters yet….ignorance can be bliss….


Lesson Learned:  God wants to get the sin out of our lives.

The Pumpkin Parable based on the book by Liz Curtis Higgs
Today I want to tell you a story. It’s a special story called a ‘parable’. A parable is an earthly story that has a heavenly meaning. In the Bible there are many parables that Jesus told so we could understand His teachings better.
This is a story about a farmer and a pumpkin.
The Farmer lives wa-a-a-a-ay out in the country. On his farm He has a pumpkin patch.
Pumpkins are really special. They start out as small oval seeds that grow into big, orange pumpkins. The farmer plants the seeds, waters, and cares for the pumpkin vines and patiently waits as they grow.
Finally by October there are big, orange pumpkins in his pumpkin patch! Some are tall and lean, some are short and round, and some have bumps and lumps. But they are all pumpkins and all were planted and cared for by the Farmer.
One day the Farmer chose a pumpkin for a special project. He brings it in from the field and washes it off. You have to be careful with pumpkins; they’re tough on the outside, but if you drop them, they break into pieces!
The Farmer takes a large knife and cuts a hole in the top of the pumpkin. Inside there is yucky, slimy pulp waiting for Him. That has to go! He cleans it all out and throws it away – never to be seen again.
After that He gives the pumpkin a new face! He cuts two triangles for eyes, a square for a nose, and a big, wide smile!
Then He does something really special. He puts a small white candle down inside the pumpkin and lights the wick.
How that pumpkin glows! As people pass by, they see the smiling pumpkin and smile back. They know that once again the Farmer has taken a simple pumpkin and changed it into a glorious sight!
The Meaning of the Parable:
Just like us, all the pumpkins were different. But there was something the same about every one of them – that yucky, slimy pulp on the inside!
The yucky, slimy pulp is like the sin that’s in us. Romans 3:23 says: “For all have sinned and fall short of the glory of God.” That’s every single one of us.
God has made a way that all our sin can be forgiven and washed away. God even says He’ll cast them as far as the East is from the West. Romans 5:8 says: “While we were yet sinners, Christ died for us.”
John 3:16 goes on to say: “For God so loved the world that He gave His only begotten Son, that whosoever believes in Him shall not perish, but have everlasting life.”
After cleaning out that pumpkin, the Farmer gave the pumpkin a new face! The Bible says God can make us a new creation too.
2 Corinthians 5:17 says: “Therefore, if anyone is in Christ, he is a new creation; the old has gone, the new has come!”
Then came the really special part. The light was placed inside that pumpkin and it glowed for all to see!
2 Corinthians 4:6 says: “For God, who said, ‘Let light shine out of darkness,’ made his light shine in our hearts to give us the light of the knowledge of the glory of God in the face of Christ.”
And Matthew 5:16 says: “In the same way, let your light shine before men, that they may see your good deeds and praise your Father in heaven.”
So we can become like that pumpkin – a glorious sight for others to see the love of Jesus!

Questions:  Do you have some “yuckiness” (some sin) that you want God to cleanse right now? Can you ask Him to forgive you?


Activity:  Carve a pumpkin with your child, and explain to them about how we have to get all the yucky stuff out, just like God does to us. He helps us get out all the yucky sin. 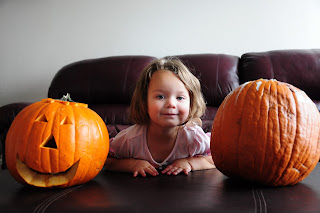 Prayer:  Heavenly Father, we are full of yuckiness until You help us clean it out.  We thank You for cleansing us and helping us be lights for You.  Please help us be new creations for You that shine bright with Your love! Amen!