0 shares
Lesson Learned:  God made rainbows.
Materials Needed: play-doh
Bible Verse:
Gensis 6-9:17, story of Noah’s Ark
Noah’s Ark and the Flood – Story Summary from: http://christianity.about.com/od/biblestorysummaries/p/noahsarkflood.htm
God saw how great wickedness had become and decided to wipe mankind from the face of the earth. However, one righteous man among all the people of that time, Noah, found favor in God’s eyes. With very specific instructions, God told Noah to build an ark for him and his family in preparation for a catastrophic flood that would destroy every living thing on earth.

God also instructed Noah to bring into the ark two of all living creatures, male and female, along with every kind of food to be stored as food for the animals and his family while on the ark. Noah obeyed everything God commanded him to do. 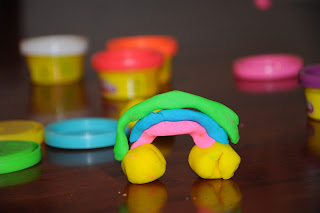 After they entered the ark, rain fell on the earth for a period of forty days and nights. The waters flooded the earth for a hundred and fifty days, and every living thing on the face of the earth was wiped out. As the waters receded, the ark came to rest on the mountains of Ararat. Noah and his family continued to wait for almost eight more months while the surface of the earth dried out.
Finally after an entire year, God invited Noah to come out of the ark. Immediately, he built an altar and worshiped the Lord with burnt offerings from some of the clean animals. God was pleased with the offerings and promised never again to destroy all the living creatures as he had just done. Later God established a covenant with Noah: “Never again will there be a flood to destroy the earth.” As a sign of this everlasting covenant God set a rainbow in the clouds.

Talking Points:  There was so much sin in the world that God had to send a huge flood to help get rid of it. He saved only a few people, Noah and his family, but after the flood He promised that He would never do that again.  As a sign of His promise, He put a rainbow in the sky. Now, whenever you see a rainbow, you can remember that God always keeps His promises.  It’s important for you to keep your promises too.

Questions: Why did God make the flood?  Why did He make a rainbow? Does God keep His promises?

Activity:  Make a rainbow out of play-doh as you tell the story.  Let the child make one too.

Prayer:  Dear Lord, thank you for making beautiful things like rainbows to remind us of You and to remind us that You always keep Your promises. Amen!