Materials Needed:   piece of cardboard cut out in the shape of a cross, scissors, paint, paint brush or q-tips


Bible Verse:
Matthew 27:32-44
32 As they were going out, they met a man from Cyrene, named Simon, and they forced him to carry the cross. 33 They came to a place called Golgotha (which means “the place of the skull”). 34 There they offered Jesus wine to drink, mixed with gall; but after tasting it, he refused to drink it. 35 When they had crucified him, they divided up his clothes by casting lots. 36 And sitting down, they kept watch over him there. 37 Above his head they placed the written charge against him: THIS IS JESUS, THE KING OF THE JEWS.


38 Two rebels were crucified with him, one on his right and one on his left. 39 Those who passed by hurled insults at him, shaking their heads 40 and saying, “You who are going to destroy the temple and build it in three days, save yourself! Come down from the cross, if you are the Son of God!” 41 In the same way the chief priests, the teachers of the law and the elders mocked him. 42 “He saved others,” they said, “but he can’t save himself! He’s the king of Israel! Let him come down now from the cross, and we will believe in him. 43 He trusts in God. Let God rescue him now if he wants him, for he said, ‘I am the Son of God.’” 44 In the same way the rebels who were crucified with him also heaped insults on him.

1 Peter 3:18
18 For Christ also suffered once for sins, the righteous for the unrighteous, to bring you to God. He was put to death in the body but made alive in the Spirit.
Talking Points:  Jesus came to Earth to save us from all the bad things we do (our sins).   The people did not believe that He was the Son so they killed Him by hanging Him on a cross.  (Show them the cut out cross).  His friends were very sad that He died but it was all part of God’s plan.  When Jesus died, He saved us from sin and made it possible for us to go to Heaven.  I’m so glad Jesus came to save us!
Questions:  Why did Jesus come to earth?  How did the people kill Jesus? Was that part of God’s plan?  How would it make you feel if one of your friends was hurt?
Activity:
Cut a cross out of the cardboard (or we bought a wood one for a dollar at Michaels’ craft store).  Let the child paint the cross. 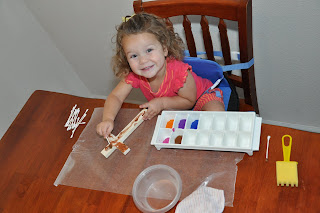 Prayer:  Holy Father and Lord, thank You for sending Your Son to save us from bad things and making a way for us to go to Heaven.  Be with us as we tell others this great news! Amen!