David the Shepherd Boy | Teach for Jesus
Skip to content

Lesson Learned:  David was a shepherd boy, and would one day be king.


Materials Needed:  blanket and small stuffed animal (a lamb would be perfect!)


6 When they arrived, Samuel saw Eliab and thought, “Surely the LORD’s anointed stands here before the LORD.”
7 But the LORD said to Samuel, “Do not consider his appearance or his height, for I have rejected him. The LORD does not look at the things people look at. People look at the outward appearance, but the LORD looks at the heart.”
8 Then Jesse called Abinadab and had him pass in front of Samuel. But Samuel said, “The LORD has not chosen this one either.” 9 Jesse then had Shammah pass by, but Samuel said, “Nor has the LORD chosen this one.” 10 Jesse had seven of his sons pass before Samuel, but Samuel said to him, “The LORD has not chosen these.” 11 So he asked Jesse, “Are these all the sons you have?”
“There is still the youngest,” Jesse answered. “He is tending the sheep.”
Samuel said, “Send for him; we will not sit down until he arrives.”
12 So he sent for him and had him brought in. He was glowing with health and had a fine appearance and handsome features.
Then the LORD said, “Rise and anoint him; this is the one.”
13 So Samuel took the horn of oil and anointed him in the presence of his brothers, and from that day on the Spirit of the LORD came powerfully upon David. Samuel then went to Ramah.


Talking Points:  God had a special person in mind to be one of his greatest kings, David. David was just a boy in Samuel, one of God’s prophets, came to David’s father, Jesse, and told him that his youngest son, David, would one day be king.  David was taking care of the sheep at the time; he was a sheepherder. A sheepherder is the person who takes care of sheep out in a field.   David would one day be king and take care of God’s people, just like he took care of the sheep in the field.


Questions:  What is a shepherd? Why do you think it’s important for a shepherd to watch after the sheep? Can you think of someone who helps take care of you?


Activity:  Dress up like a shepherd by pulling a blanket over your head and around your shoulders.  Take turns with your child and let them watch over a stuffed animal too. 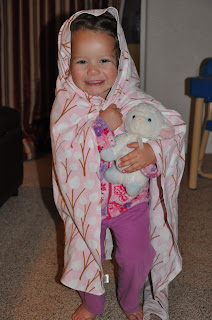 Prayer: Holy Lord and Father, thank You for taking care of us and watching over us like a shepherd. Amen!