Called Out of Egypt | Teach for Jesus
Skip to content

Called Out of Egypt

Lesson Learned:  Jesus and His family go to Egypt.

Bible Verse:
Matthew 2:1-12
1 After Jesus was born in Bethlehem in Judea, during the time of King Herod, Magi from the east came to Jerusalem 2 and asked, “Where is the one who has been born king of the Jews? We saw his star when it rose and have come to worship him.”
3 When King Herod heard this he was disturbed, and all Jerusalem with him. 4 When he had called together all the people’s chief priests and teachers of the law, he asked them where the Messiah was to be born. 5 “In Bethlehem in Judea,” they replied, “for this is what the prophet has written:
6 “‘But you, Bethlehem, in the land of Judah,
are by no means least among the rulers of Judah;
for out of you will come a ruler
who will shepherd my people Israel.”
7 Then Herod called the Magi secretly and found out from them the exact time the star had appeared. 8 He sent them to Bethlehem and said, “Go and search carefully for the child. As soon as you find him, report to me, so that I too may go and worship him.”
9 After they had heard the king, they went on their way, and the star they had seen when it rose went ahead of them until it stopped over the place where the child was. 10 When they saw the star, they were overjoyed. 11 On coming to the house, they saw the child with his mother Mary, and they bowed down and worshiped him. Then they opened their treasures and presented him with gifts of gold, frankincense and myrrh. 12 And having been warned in a dream not to go back to Herod, they returned to their country by another route.
13 When they had gone, an angel of the Lord appeared to Joseph in a dream. “Get up,” he said, “take the child and his mother and escape to Egypt. Stay there until I tell you, for Herod is going to search for the child to kill him.”  14 So he got up, took the child and his mother during the night and left for Egypt, 15 where he stayed until the death of Herod. And so was fulfilled what the Lord had said through the prophet: “Out of Egypt I called my son.”
16 When Herod realized that he had been outwitted by the Magi, he was furious, and he gave orders to kill all the boys in Bethlehem and its vicinity who were two years old and under, in accordance with the time he had learned from the Magi.

Talking Points:  The wise men traveled a long, long way to see baby Jesus.  They had seen a very unusual star in the sky and they knew that someone special, the future King of the Jews, the Son of God, had been born.  King Herod was a very bad king and he didn’t want anyone to take his position as king so Herod wanted to get rid of this baby king.  He asked the wise men where this new king would be born.  The wise men told Herod that Jesus would be born in Bethlehem.  After they saw Jesus and brought Him gifts, they were warned in a dream to go home a different route and avoid the bad King Herod.  (If you ever have a feeling that something is dangerous, you should always avoid the situation, just like the wise men did! Trust your feelings! It might be the Holy Spirit keeping you safe!)  Afterwards, Jesus’ father Joseph also had a dream that he should go down to Egypt so Jesus, Mary, and Joseph listened to God and headed to Egypt.

Questions:  How did the wise men know Jesus had been born?  What was the name of the king who didn’t like Jesus? Was King Herod a good king or a bad king?  Where did Jesus and His family go?

Activity:
Painted Star*
Mix together 1 cup flour, 1/2 salt, and 1/2 water.  Roll flat and then cut out several stars with the star-shaped cookie cutters.  Bake for 4 hours at 200 degrees.  When the star has cooled down, let the child decorate it with markers.
*You may want to make the stars the day before so the child can paint them as you do the activity. 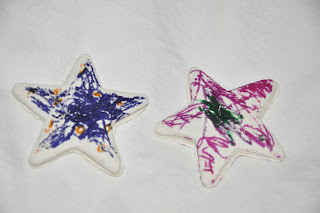 Prayer: Holy Father, thank You for sending Your Son, Jesus.  You knew exactly when He would be born and You kept Him safe from King Herod.  Please protect us from danger too. Amen!