The First Sin | Teach for Jesus
Skip to content

Bible Verse:
Genesis 3:1-13, 23
1 Now the serpent was more crafty than any of the wild animals the LORD God had made. He said to the woman, “Did God really say, ‘You must not eat from any tree in the garden’?”  2 The woman said to the serpent, “We may eat fruit from the trees in the garden, 3 but God did say, ‘You must not eat fruit from the tree that is in the middle of the garden, and you must not touch it, or you will die.’”
4 “You will not certainly die,” the serpent said to the woman. 5 “For God knows that when you eat from it your eyes will be opened, and you will be like God, knowing good and evil.”
6 When the woman saw that the fruit of the tree was good for food and pleasing to the eye, and also desirable for gaining wisdom, she took some and ate it. She also gave some to her husband, who was with her, and he ate it. 7 Then the eyes of both of them were opened, and they realized they were naked; so they sewed fig leaves together and made coverings for themselves.
8 Then the man and his wife heard the sound of the LORD God as he was walking in the garden in the cool of the day, and they hid from the LORD God among the trees of the garden. 9 But the LORD God called to the man, “Where are you?”
10 He answered, “I heard you in the garden, and I was afraid because I was naked; so I hid.”
11 And he said, “Who told you that you were naked? Have you eaten from the tree that I commanded you not to eat from?”
12 The man said, “The woman you put here with me—she gave me some fruit from the tree, and I ate it.”
13 Then the LORD God said to the woman, “What is this you have done?”
The woman said, “The serpent deceived me, and I ate.”

23 So the LORD God banished him from the Garden of Eden to work the ground from which he had been taken.

Talking Points: God does not like it when we disobey Him. God had made Adam and Eve and let them live in a beautiful garden called the Garden of Eden.  They were allowed to eat anything they wanted from the garden except for the fruit from one tree.  A bad snake told Eve she should eat from the tree anyway. Eve listens to the snake and disobeys God and eats from the tree that God had told her not to eat from.  Adam eats some too.  God was not happy with Adam and Eve.  They had done a bad thing–they had sinned and God made them leave the Garden of Eden.

Questions: God told Eve should could eat everything in the garden except one thing: what was it?  Did Adam and Eve obey God? Was God happy or sad that they had disobeyed? What happened to Adam and Eve? 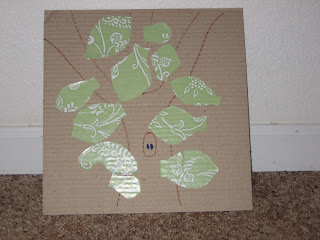 Draw some branches on the cardboard from the cereal box.  Cut out several leaves from the green contact paper.  Help the child peel the back of the contact paper and stick the leaves to the branches of the tree.

Prayer:  Dear God, we do not want to disobey.  We know that when we disobey it makes You sad. Help us to listen to our moms and dads and You today! Amen!