Lesson Learned:  God had a plan for Paul to share the gospel message.

Materials Needed: large box, small broom or similar object
Bible Verse:
Acts 26:4-23
4 “The Jewish people all know the way I have lived ever since I was a child, from the beginning of my life in my own country, and also in Jerusalem. 5 They have known me for a long time and can testify, if they are willing, that I conformed to the strictest sect of our religion, living as a Pharisee. 6 And now it is because of my hope in what God has promised our ancestors that I am on trial today. 7 This is the promise our twelve tribes are hoping to see fulfilled as they earnestly serve God day and night. King Agrippa, it is because of this hope that these Jews are accusing me. 8 Why should any of you consider it incredible that God raises the dead?
9 “I too was convinced that I ought to do all that was possible to opposethe name of Jesus of Nazareth. 10 And that is just what I did in Jerusalem. On the authority of the chief priests I put many of the Lord’s people in prison, and when they were put to death, I cast my vote against them. 11 Many a time I went from one synagogue to another to have them punished, and I tried to force them to blaspheme. I was so obsessed with persecuting them that I even hunted them down in foreign cities.
12 “On one of these journeys I was going to Damascus with the authority and commission of the chief priests. 13 About noon, King Agrippa, as I was on the road, I saw a light from heaven, brighter than the sun, blazing around me and my companions. 14 We all fell to the ground, and I heard a voice saying to me in Aramaic,[a] ‘Saul, Saul, why do you persecute me? It is hard for you to kick against the goads.’
15 “Then I asked, ‘Who are you, Lord?’
“ ‘I am Jesus, whom you are persecuting,’ the Lord replied. 16 ‘Now get up and stand on your feet. I have appeared to you to appoint you as a servant and as a witness of what you have seen and will see of me. 17 I will rescue you from your own people and from the Gentiles. I am sending you to them 18 to open their eyes and turn them from darkness to light, and from the power of Satan to God, so that they may receive forgiveness of sins and a place among those who are sanctified by faith in me.’
19 “So then, King Agrippa, I was not disobedient to the vision from heaven. 20 First to those in Damascus, then to those in Jerusalem and in all Judea, and then to the Gentiles, I preached that they should repentand turn to God and demonstrate their repentance by their deeds.21 That is why some Jews seized me in the temple courts and tried to kill me. 22 But God has helped me to this very day; so I stand here and testify to small and great alike. I am saying nothing beyond what the prophets and Moses said would happen — 23 that the Messiah would suffer and, as the first to rise from the dead, would bring the message of light to his own people and to the Gentiles.”
Talking Points:  God has a plan for each and every one of His people, including you. Today we read about a very special person named, Paul.  Paul was actually called Saul before he believed in Jesus and before he believe in Jesus, Saul did not like anyone who did.  In fact, he tried to get people who believed in Jesus thrown in jail or killed.  One day, Saul was headed to a town called Damascus when a bright light appeared out of the sky and blinded Saul.  Saul could not hear anything but he heard a loud voice coming down from Heaven. The voice belonged to Jesus and Jesus told Saul, “I am real; believe in me and tell others about me!”  From that time one, Saul was called Pau.  Paul spent much of his time traveling all over the world–sometimes by boat, sometimes by walking–to tell everyone he met about the gospel message and that Jesus loved them. 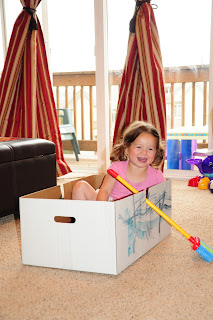 Questions:  What was Paul’s name before he was blinded by the light?  Who do you think was talking to Paul when he was blinded? What message did Paul receive from Jesus?
Activity:
On a Misson
Take a large box and turn it upside down so that your child can sit in it. (You may have fun letting your child paint or color the boat before they use it). Let them “row” the boat with the small broom. When they reach their destination, sing a song or too about Jesus.
Prayer:  Heavenly Father, You love us and You have a plan for each one of us. Lord, we want to share the Gospel of Your message with Your people, just like Paul did.  Lead us to share with someone today! Amen!