Lesson Learned:  Wise men came to visit Jesus after He was born.


Bible Verse:
Matthew 2:1-12
1 After Jesus was born in Bethlehem in Judea, during the time of King Herod, Magi from the east came to Jerusalem 2 and asked, “Where is the one who has been born king of the Jews? We saw his star when it rose and have come to worship him.”
3 When King Herod heard this he was disturbed, and all Jerusalem with him. 4 When he had called together all the people’s chief priests and teachers of the law, he asked them where the Messiah was to be born. 5 “In Bethlehem in Judea,” they replied, “for this is what the prophet has written:
6 “‘But you, Bethlehem, in the land of Judah,
are by no means least among the rulers of Judah;
for out of you will come a ruler
who will shepherd my people Israel.’”
7 Then Herod called the Magi secretly and found out from them the exact time the star had appeared.8 He sent them to Bethlehem and said, “Go and search carefully for the child. As soon as you find him, report to me, so that I too may go and worship him.”
9 After they had heard the king, they went on their way, and the star they had seen when it rose went ahead of them until it stopped over the place where the child was. 10 When they saw the star, they were overjoyed. 11 On coming to the house, they saw the child with his mother Mary, and they bowed down and worshiped him. Then they opened their treasures and presented him with gifts of gold, frankincense and myrrh. 12 And having been warned in a dream not to go back to Herod, they returned to their country by another route.


Talking Points:  Many people had been waiting for Jesus to be born. They knew that God had a plan to send someone special to save them from sin, but they didn’t know when He would come.  Some of these people, called Magi, were considered very smart men and they traveled a long, long way to see Jesus after He was born.  Back then, people didn’t have phones or computers so no one could call to them that they Jesus had been born. Instead, they knew Jesus had been born because they saw a huge, very bright star in the sky that they knew was a message from God that Jesus was here.


Questions:  How did the Magi know that Jesus had been born?  Do you think God could still use the stars to give you a message today?


Activity: Cut out a star with the scissors.  Let the child decorate the stars with glitter (or crayons if you prefer something less messy!). Staple the star to the straw.  Hang up the star somewhere in the room and have the child find it.  Then, say a pray of thanks for Jesus’ birth under the star.  (Or let the child march around the room with the star, holding onto the straw and following it like the Magi did.) 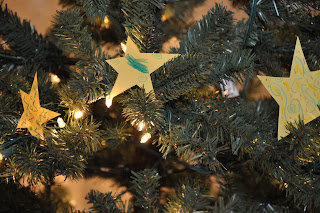 Prayer:  Thank You, God, for sending us Your Son and letting the whole world know!  Amen!