Lesson Learned: If you have faith, God can do all things.

Bible Verse:
Matthew 17: 24-27
24 After Jesus and his disciples arrived in Capernaum, the collectors of the two-drachma temple tax came to Peter and asked, “Doesn’t your teacher pay the temple tax?”
25 “Yes, he does,” he replied.
When Peter came into the house, Jesus was the first to speak. “What do you think, Simon?” he asked. “From whom do the kings of the earth collect duty and taxes—from their own children or from others?”
26 “From others,” Peter answered.
“Then the children are exempt,” Jesus said to him. 27 “But so that we may not cause offense, go to the lake and throw out your line. Take the first fish you catch; open its mouth and you will find a four-drachma coin. Take it and give it to them for my tax and yours.”

Talking Points:
Jesus didn’t need to pay the tax that they are talking about in this story but He did anyway.  In fact, He even told Peter exactly where to go to get the money to pay it.    Only God could have known about a fish in the Sea of Galilee that had swallowed a coin that was the exact amount they needed to pay the tax. Only God could have made a fish eat it and then get caught on Peter’s fishing pole on the very first try. God miraculously supplied Peter’s needs and He will supply everything you need as well. All He is waiting on is for you to have the faith to believe He will do what He says He will.

Questions:
What did Peter find in the fish?  Who told Peter that the fish would have a coin in it?   What did Peter do with the coin?

Activity:
Step 1:
Cut 3 fish shapes out of construction paper and let the child decorate them with stickers. 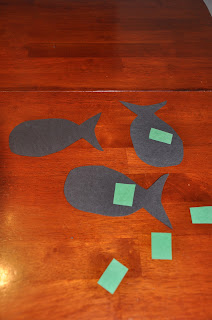 Step 2:
Tape a penny on the back of one fish. 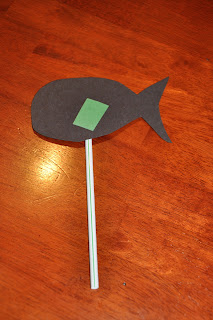 Step 4:
Hold up the front of the fish toward the child and let them go “fishing” until they find the fish with the straw on it.  Remind them that in the story, the first fish that Peter caught had a coin in it. 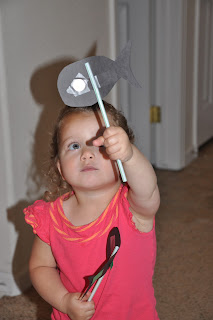 Prayer:  Heavenly Father, You know all things.  Help us to have faith like Peter did when he went fishing and found the coin. Amen!