Lesson Learned:  Elijah obeyed God and God protected him during a drought.

Bible Verse:
1 Kings 16:33
33 Ahab also made an Asherah pole and did more to arouse the anger of the Lord, the God of Israel, than did all the kings of Israel before him.

17 Now Elijah the Tishbite, from Tishbe in Gilead, said to Ahab, “As the Lord, the God of Israel, lives, whom I serve, there will be neither dew nor rain in the next few years except at my word.”

2 Then the word of the Lord came to Elijah: 3 “Leave here, turn eastward and hide in the Kerith Ravine, east of the Jordan. 4 You will drink from the brook, and I have directed the ravens to supply you with food there.”
5 So he did what the Lord had told him. He went to the Kerith Ravine, east of the Jordan, and stayed there. 6 The ravens brought him bread and meat in the morning and bread and meat in the evening, and he drank from the brook.

James 5:17
17 Elijah was a human being, even as we are. He prayed earnestly that it would not rain, and it did not rain on the land for three and a half years.

Talking Points:  Elijah was a prophet who loved God and listened to God’s commands. Elijah lived in a time when mos of the people around him were ignoring God and disobeying him.  This made God angry, and God told Elijah to pray that it would not rain for the next few years.  When it does not rain for a long time, it is called a drought.  When there is no rain, food does not grow and it can be hard find  water.  Elijah prayed that it would not rain, but he trusted God that God would protect him and still give him food and water.  And God did.  God sent some birds, called ravens, to bring food to Elijah during the drought.  It is good to trust and obey God; when you don’t it can make Him angry.

Questions:  What is a drought? Why was God angry at the people and send a drought? What kind of animal brought food to Elijah?  Would you be surprised if a bird brought you your dinner tonight?

Activity:
Handprint Raven
Have the child draw an oval and let them cut it out or help them do it.  Glue the oval in the center of another piece of paper.  Next trace both of the child’s hands on the black piece of paper and cut them out.  Glue the hand prints on either side of the oval circle to create the raven. 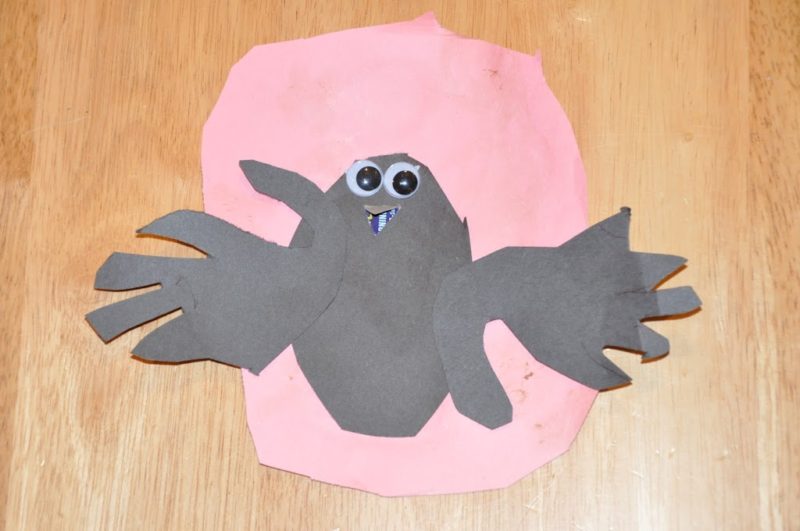 Prayer: Heavenly Father, please protect us like You protected Elijah.  Help us to obey You and listen to Your commands. We do not want to anger You.  We love You. Amen!