Dorcas, A Good Helper | Teach for Jesus
Skip to content

0 shares
Lesson Learned:  God likes it when we help others.
Materials Needed: scissors, markers or stickers, paper
Bible Verse:
Acts 9:36-43
36 In Joppa there was a disciple named Tabitha (in Greek her name is Dorcas); she was always doing good and helping the poor. 37 About that time she became sick and died, and her body was washed and placed in an upstairs room. 38 Lydda was near Joppa; so when the disciples heard that Peter was in Lydda, they sent two men to him and urged him, “Please come at once!”

39 Peter went with them, and when he arrived he was taken upstairs to the room. All the widows stood around him, crying and showing him the robes and other clothing that Dorcas had made while she was still with them.
40 Peter sent them all out of the room; then he got down on his knees and prayed. Turning toward the dead woman, he said, “Tabitha, get up.” She opened her eyes, and seeing Peter she sat up. 41 He took her by the hand and helped her to her feet. Then he called for the believers, especially the widows, and presented her to them alive. 42 This became known all over Joppa, and many people believed in the Lord. 43 Peter stayed in Joppa for some time with a tanner named Simon.

Talking Points:  Dorcas was a woman of God and she loved people just like God wants us to.  She did kind things for others to show them this love.  She was always doing good and helping the poor and she made clothes for them.  One day, she gets sick and dies and everyone that knows her is very sad.  Peter, one of Jesus’ friends, came to where she lived and healed her.  When Peter said, “Get up!”, Dorcas opened her eyes and got to her feet.  Because they both loved and believed in Jesus, she was saved.    Now, she can continue to do good things for God, which He likes.
Questions:  What did Dorcas to do help others? What is something you do to help you mom or dad? Does God like it when you help others?
Activity:
Cut out the shapes of a shirt and pants from the paper.  Then let the child decorate the clothes with markers or stickers. 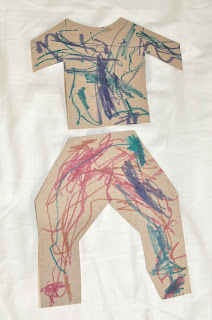 Prayer:   Dear Lord, we want to be helpers for You always!  Please help us to be like Dorcas and love on all those around us. Amen!