Daniel and the Lions’ Den Part 2

0 shares
Lesson Learned:  God commands us never to lie.  We should never lie to get our way.

At the king’s command, the men who had falsely accused Daniel were brought in and thrown into the lions’ den, along with their wives and children. And before they reached the floor of the den, the lions overpowered them and crushed all their bones.
25 Then King Darius wrote to all the peoples, nations and men of every language throughout the land:
“May you prosper greatly!
26 “I issue a decree that in every part of my kingdom people must fear and reverence the God of Daniel.
“For he is the living God
and he endures forever;
his kingdom will not be destroyed,
his dominion will never end.
27 He rescues and he saves;
he performs signs and wonders
in the heavens and on the earth.
He has rescued Daniel
from the power of the lions.”
28 So Daniel prospered during the reign of Darius and the reign of Cyrus the Persian.

Talking Points:
Daniel wasn’t eaten in the lions den because he trusted in God and knew God would save him.  The men who were jealous of Daniel were thrown in the den and devoured by the lions.   The men had lied and they were punished for doing so.
Questions: 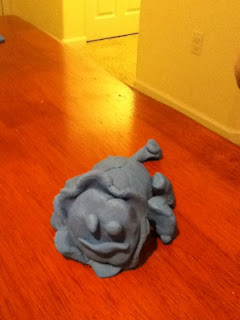 Do you think the lions were hungry when Daniel was in the cave?  Why do you think they ate the other men and not Daniel?  Is it right to lie to get your way?

Activity:
Spread the wax paper on the table.

Use clay to make a lion.   Below is a homemade, non-toxic recipe you can use.
1 cup flour
2 cups oatmeal
1 cup water
Combine all ingredients and then let child play.
Prayer:
Dear God, we know it is wrong to lie and deceive others to get our way. Keep our mouths from untruths. Amen.