Crown of Thorns | Teach for Jesus
Skip to content

1Then Pilate took Jesus and had him flogged. 2 The soldiers twisted together a crown of thorns and put it on his head. They clothed him in a purple robe 3 and went up to him again and again, saying, “Hail, king of the Jews!” And they slapped him in the face.

Talking Points: Jesus never did anything wrong.  He was perfect because He was God.  However, some people didn’t believe Jesus when they said He was the Son of God and they were jealous of Him.   So they wanted to kill Him and they had him arrested to try to prove that he had done something wrong.  Even then they found that He never did anything wrong, but they still wanted to crucify Him.  Jesus suffered a lot before He died; the soldiers beat him, teased him, and put a crown of thorns on His head.  They were truly terrible toward Jesus before He died.  Jesus was willing to go through all this pain for you and for me so that we could go to Heaven one day!

Questions:  Do you think a crown of thorns would hurt? Do you think Jesus was in pain before He was crucified? Are you grateful that Jesus was willing to go through all that pain because He loved us so much and He wanted us to go to Heaven? 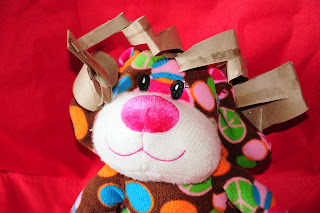 Activity:
Crown of Thorns
Flatten the tube.
Make slits in tube, alternating sides approximately a half inch apart. Be careful not to cut all the way across.
Puff the tube back up again.
Staple the ends together to make a crown and place on the child’s head.

Prayer:  Heavenly Father and Lord, we can never imagine how much Jesus suffered before You died. We know You did it because You loved us and want us to go to Heaven with You.  We love You. Amen!