Materials Needed:   ladle, figurine, bucket of water
Bible Verse:
Exodus 2:1-10
1 Now a man of the tribe of Levi married a Levite woman, 2 and she became pregnant and gave birth to a son. When she saw that he was a fine child, she hid him for three months. 3 But when she could hide him no longer, she got a papyrus basket for him and coated it with tar and pitch. Then she placed the child in it and put it among the reeds along the bank of the Nile. 4 His sister stood at a distance to see what would happen to him.
5 Then Pharaoh’s daughter went down to the Nile to bathe, and her attendants were walking along the riverbank. She saw the basket among the reeds and sent her female slave to get it. 6 She opened it and saw the baby. He was crying, and she felt sorry for him. “This is one of the Hebrew babies,” she said.
7 Then his sister asked Pharaoh’s daughter, “Shall I go and get one of the Hebrew women to nurse the baby for you?”
8 “Yes, go,” she answered. So the girl went and got the baby’s mother. 9 Pharaoh’s daughter said to her, “Take this baby and nurse him for me, and I will pay you.” So the woman took the baby and nursed him. 10 When the child grew older, she took him to Pharaoh’s daughter and he became her son. She named him Moses, saying, “I drew him out of the water.”


Talking Points:  God protects all His children.  A great example of this is how He protected one of His most famous servants, Moses.  Moses was born while a mean king ruled.  This king wanted to kill all the Hebrew baby boys, including baby Moses.  Moses’ mother couldn’t do this, so she wrapped her baby boy up in a blanket, put him into a basket, and sent him floating down a river.  She also sent Moses’ sister, Miriam, to watch after the basket as it floated down the river.  The river was full of many dangerous animals like crocodiles and piranhas.  However, God made sure that nothing happened to Moses, and Moses was rescued by the king’s own daughter and his life was spared.   Pharoah’s daughter named the baby, Moses, which means “I drew him out of the water.”  God protected Moses (and He protects all His children!) despite all those dangers.

Questions:  Can you think of a time when you were scared?  Did God protect you?  How?

Activity:  Place the figurine in the water (a Little People’s figurine is perfect) and let the child use the ladle to draw it out of the water. 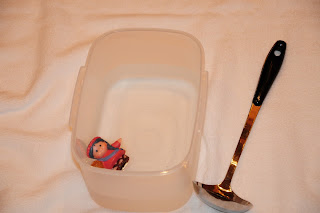 Prayer:  Dear God, thank You for protecting each and every one of your children.  Watch over us in all situations, just like you watched over baby Moses in the basket and had Pharaoh’s daughter draw him out of the water.  Amen!